If you’ve ever ridden the 1/2/3 line on the NYC subway, you’ve probably seen one of these signs: 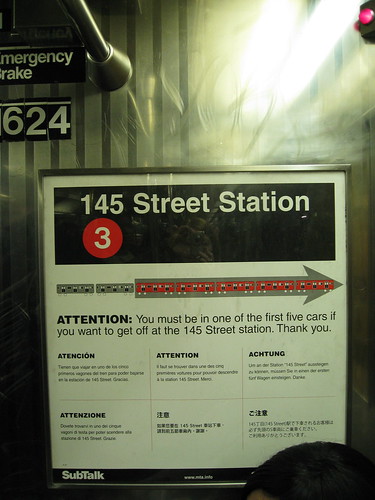 Both the 145th St stop and the South Ferry stop have shorter platforms than the rest of the stations. That means that unless you’re in one of the first five cars, you won’t be able to exit the train when it reaches the station.

Signs like this are important to set expectations. But here’s the amazing part: the sign doesn’t tell you if you are currently in one of the first five cars. In fact, there is no signage whatsoever on the inside or the outside of the car to indicate which number car you’re in. The only thing you can do is poke your head outside of the car when the doors open at a stop and try to guess if you’re far enough forward. This forces people to sprint between cars in the few seconds the train is in the station, sometimes even missing the next car before the doors close. Talk about a user experience problem!