Last night I had the absolute pleasure of participating in a tremendously successful boxee NYC meetup at Webster Hall. According to venue staff, more than 600 people were in attendance. It’s a huge space and the entire downstairs was packed, with many people also up in the balcony. I was thrilled to see such a massive turnout.

Walking up to Webster Hall and seeing boxee on the famous marquee was a total trip. Fifteen years ago, my babysitter was a go-go dancer there, and never did I think I would step on the same stage for an altogether different reason. 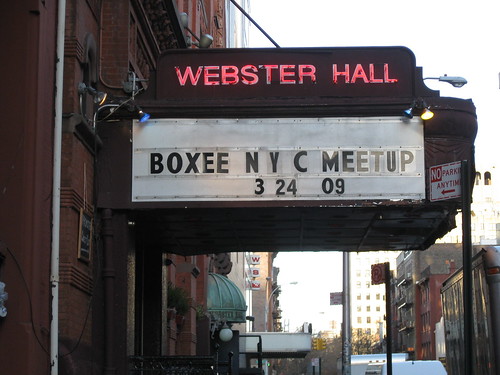 Andrew Kippen of Stage Two Consulting flew in from San Francisco to MC the event. The lineup included Next New Networks talking about their new venture 99 Dollar Music Videos, blip.tv on supporting independent filmmakers, and a surprise appearance from the CTO of Pandora — boxee’s newest content provider.

I was given the honor of presenting some major features coming in the beta alongside Avner Ronen, boxee’s CEO. I’ve been consulting for boxee since December, and put a lot of work into figuring out how to further revolutionize the living room experience. I’m really proud of the work we’ve accomplished so far, and look forward to getting this stuff out to our users in the near future.

The presentation we put together on what’s coming in the beta:

New features in the boxee beta:

There was a great recap of the event titled “There’s Something About Boxee” in the New York Times Bits blog today.

And here’s the piece that mentions me:

A huge thanks to Avner and the whole boxee team for including me in the evening and allowing me to be a part of their amazing journey.

Feel free to watch the whole recording on Mogulus. I think I come on about 1 hour and 11 minutes in.

I look forward to sharing more details on the beta soon!