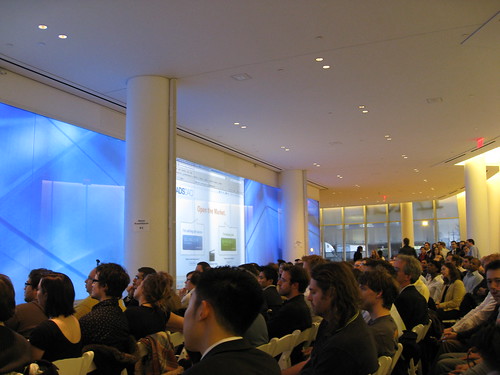 Just got home from this month’s NY Tech Meetup, which Scott said is the 42nd meeting so far. I’m talking about Scott Heiferman, CEO and co-founder of Meetup.com. He started NY Tech and is the MC for every event.

This month they packed in eight presenters at five minutes each, so things moved pretty swiftly. Unlike last month, this month didn’t have any particular theme.

As usual, I’ll give you a quick overview of each website and my immediate impressions. I’m judging both the idea and the implementation. Keep in mind that I have not done in-depth research into any of these companies and if something doesn’t sound right, it’s probably because the presenter did a crappy job of explaining it :)

VidyUp by the folks at Magnify.net
Presenter: Steve Rosenbaum, co-founder and CEO, and Simon Cavalletto, co-founder and CTO
In one sentence: A free widget that allows your visitors to upload videos to your site while simultaneously publishing them to YouTube
Notes: Built using the YouTube API in less than two weeks; future release will allow for greater flexibility of video upload and storage. I gotta admit, I don’t really get the concept.
Idea: so-so | Implementation: boo-hoo

ADSDAQ by the folks at ContextWeb
Presenter: John Pavley, CTO, and Derek Brinkman, VP Product Management
In one sentence: Yet another advertising network, but this one lets publishers control the price
Notes: CPM (cost per million) calculator lets you plug in values from your other ad platforms and automatically gives you a 20% boost; during Q&A an audience member noted, “Your fill rates are miserable…and I’ve surveyed 200 people.”
Idea: boo-hoo | Implementation: woo-hoo (if it’s possible to implement a bad idea skillfully, they’ve done it)

Kluster
Presenter: Ben Kaufman, founder and CEO
In one sentence: A process by which community members generate product ideas to meet a defined set of requirements; those with the most traction earn rewards in both cash and virtual currency
Notes: Launched at the TED conference last month, 2,700 people collaborated to create a new product in 72 hours. Kaufman’s parents remortgaged their house to give him the capital to start his business three years ago, when he was a senior in high school
Idea: woo-hoo | Implementation: woo-hoo

Twiddla
Presenter: Ben Satterfield, co-founder
In one sentence: Collaborative, web-based whiteboarding that allows co-browsing, upload of Google docs, and screen capture for later use
Notes: Won technical achievement award at this year’s SXSW; requires no Flash or other plugins, runs entirely in AJAX. No sign up required. Unfortunately they have yet to implement permissions settings, however they plan to use the levels of “anarchy,” “democracy” and “fascism” when they do. A version for the iPhone to be released soon.
Idea: woo-hoo | Implementation: woo-hoo

Muxtape
Presenter: Justin Ouellette, one-man show, about to end a year-long gig as a senior developer at Vimeo
In one sentence: Share music online through mixtapes of 12 songs
Notes: Launched a week ago today, it’s already become a huge internet phenomenon; soon will feature links to buy each song on Amazon or iTunes. As Justin said, “When people are forced to reduce their choices, what’s left is the cream of the crop.”
Idea: woo-hoo | Implementation: woo-hoo

At the end of the event, Scott announced that the organization had just reached 6,000 members. Because of the enormous growth, they want to become a more established, full-fledged organization — though I’m not quite sure what that means. In any case, they’ll be increasing the door fee to $10 per person (from $5). That elicited many boos from the audience. I wonder if attendance really will drop. Is the experience worth twice the price?