Okay, so the Meetup was almost two weeks ago, but I’ve been sick so give me a break! Better late than never to report back from this month’s NY Tech Meetup at the lovely IAC building.

For the first time, this month’s lineup was based on a theme: “Power to the People: The Future of Organizing” 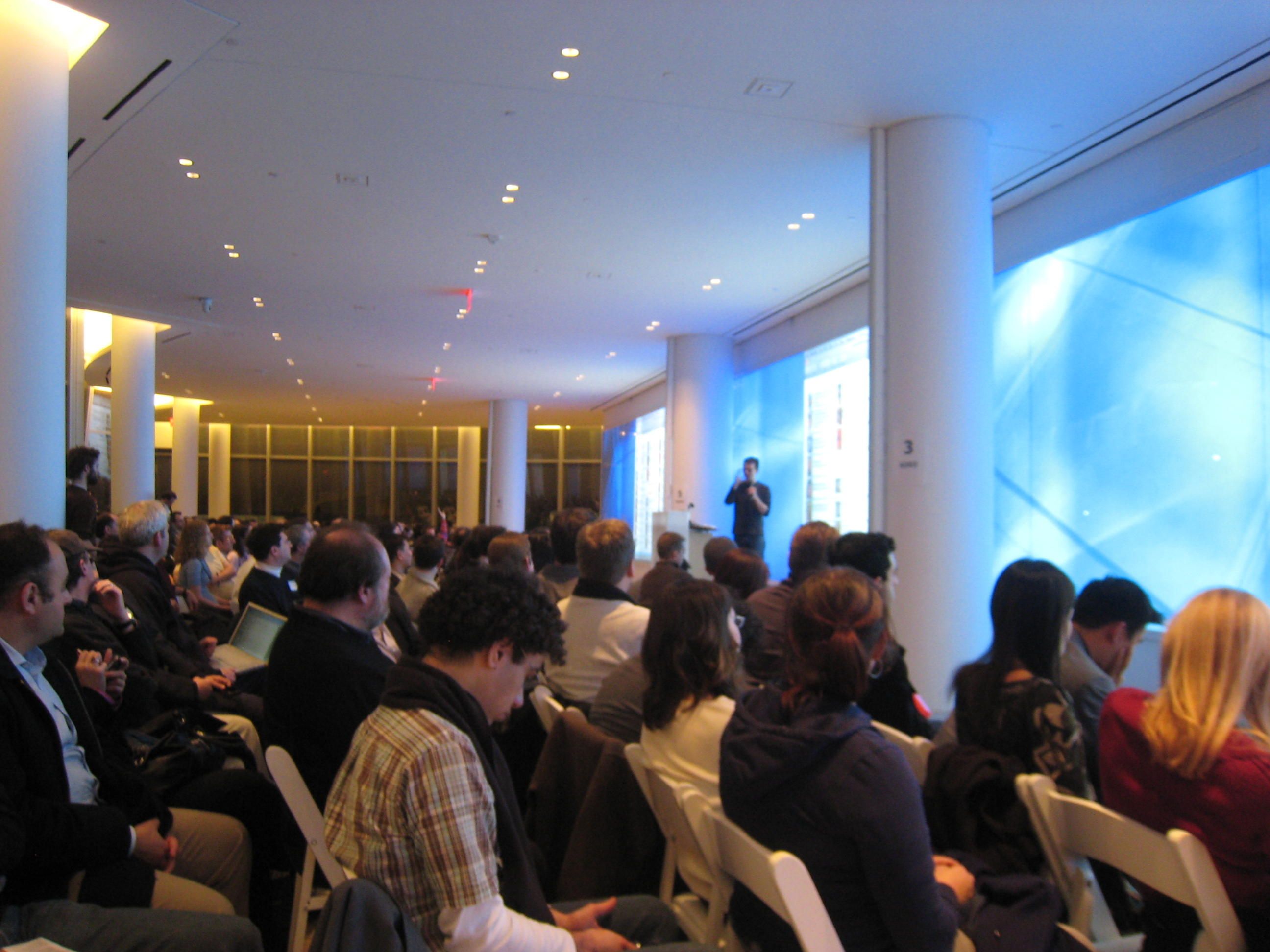 Unfortunately I missed the first presentation by Jordan Goldberg, founder of stickK.com so there isn’t much I can say about it. The basic concept is that it helps you to achieve your personal goals — lose weight, stop smoking, etc. — by “putting a contract out on yourself,” the idea being that social pressure will help you stay on track. It got a hearty round of applause, so it’s definitely worth checking out.

For the rest of the presentations that I saw, I list them for you here with my evaluation of each. Like in my January 2008 write-up, I’m focusing on two criteria: idea and implementation.

Company: Meetup.com
Presenter: Jesse Richards, Experience Manager (according to the website he “plans features that help new visitors to Meetup find their perfect Meetup Groups”)
In one sentence: Jesse was there to promote the new “Pledges” feature of Meetups in the Making, which lets people express interest in helping out with specific items when a new Meetup starts –suggesting places to meet, chipping in for costs, helping to recruit others, etc
Notes: Jesse divulged that there are 100 times more waiting lists than operational Meetup groups
Idea: woo-hoo | Implementation: woo-hoo

Company: School of Everything
Presenter: Paul Miller, Co-founder and CEO
In one sentence: Helps people who want to learn and people who want to teach find each other for face-to-face classes on just about anything
Notes: Started in the UK, the offerings went international this month — but it’s still in alpha so don’t expect much content
Idea: woo-hoo | Implementation: woo-hoo

Company: The Point
Presenter: Andrew Mason, Founder and CEO
In one sentence: Helps people organize around social issues and create campaigns only when there’s a critical mass that can make a difference
Notes: Based on the “tipping point” model, no one acts or pays until there are enough people involved for the action to have an impact
Idea: woo-hoo | Implementation: woo-hoo

Lastly was a presentation by Clay Shirky, consultant, writer and adjunct professor at NYU’s graduate Interactive Telecommunications Program (ITP). His new book, Here Comes Everybody: The Power of Organizing Without Organizations, is a look into how groups are using the Internet to self-organize. A few choice quotes from his talk:

“Thinking is for doing”

“Technology is aiding in the participatory democracy”

Overall the evening was a great opportunity to see so much work in one very important space. Some complained that, while interesting, the event wasn’t true to its purpose because it promoted companies from around the world, not just New York-based start-ups. Having one off-month is no big deal, and I’m sure it got a lot of wheels turning. It got me thinking about the role that usability plays in social action platforms. Perhaps you’ll see something about this from me in the future.

See you next month on April Fools.