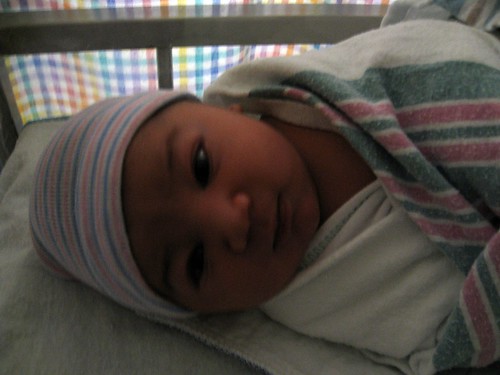 When he first opened his eyes.

I’m an only child so I’ll never truly know the experience of being an aunt. If I’m lucky I’ll be an aunt to my future husband’s nieces and nephews, and I’m sure that I’ll have friends whose kids consider me an aunt, but I’ll never really be one by blood.

Although I am not related to Theresa by blood, she was my babysitter for the first 9-1/2 years of my life. To be clear, my parents were very present in my childhood, and continue to be amazing, loving, parents, but they own and run a company together, and have an active life away from home. Plain and simple, Theresa was a second mother to me. Her family (which also includes her son David and husband Earl) always felt like family to me, and now, in a way, they actually are.

I never expected that Donna might ask me to be Griffin’s godmother. That she did is one of the greatest gifts I will ever receive. It is an honor of epic proportions — and I also recognize that it is a huge responsibility.

Despite being Jewish (the concept of godparents being of Christian origin), I actually have a godmother of my own, and a wonderful one at that. Bonnie has been my mom’s best friend since they were in the second grade. While I was growing up, she would take me shopping, take me to dinner, stay up-to-date with what was going on in my life, tell me stories of her young adult adventures, and just generally provide me with wisdom and love.

Now that I’ve become a godmother, I felt it was important to do a bit of research to see might be expected of me in this new role. Traditionally, a godparent is meant to ensure the religious education of the child — after all, the term is godparent. But the modern take is to be a spiritual guide, an über-mentor, and a caretaker in the event that the parents are no longer present.

In thinking about what it will mean to help shape Griffin’s spirituality, I couldn’t help but relate it to my role as a user experience designer. At the core of what we do — all of the material artifacts we produce put aside — we transform the value systems of the organizations in which we work. A true user experience designer sees conflict between the internal mechanisms of the company and the external audience it wants to reach, and aims to bring greater truth to the interaction between the two, creating deeper meaning for the business and for the customer.

Is that not the same thing as encouraging spirituality? I see spirituality as the desire to develop your inner self, connecting yourself to the greater universe and finding the inspiration to be the best possible version of yourself you can be. Isn’t that our higher mission as user experience designers? To encourage our companies to be better versions of themselves, to have a stronger connection with the people they serve, to continually self-reflect and readjust their behavior accordingly? I think they’re very much the same.

So while the long road ahead as Griffin’s godmother seems daunting, I feel confident that I have the skills to do the job well, and to have an important impact on not only how the world sees him, but how he sees himself. It’s my first month on a new life-long project, and I can’t wait to get to work.