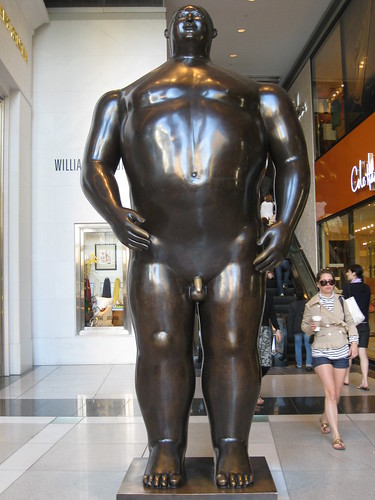 This big guy stands in the lobby of the Time Warner Center in Columbus Circle. As I walked around it the other day, I noticed something curious about his ding-a-ling — it’s a different color than the rest of his body. Which means that more than a few people have been rubbing it as they pass by. The oils in people’s hands wear away the bronze.

The 20-foot sculpture was made by the world famous Fernando Botero and is one in a set of two pieces titled Adam and Eve. (Eve is on the other side of the lobby, and curiously none of her parts are worn down.)

When choosing the materials for your design, you need to consider how it will change over time. Perhaps given the high traffic area and general deviance of New Yorkers and New York tourists, Botero should have used a different metal that doesn’t so clearly expose its wear.