I’ve got a thing for Twitter and I own a BlackBerry, so naturally I use TwitterBerry. It’s a downloadable BB app that lets me post updates, get replies, read my friends timeline and the public timeline — all without having to load Twitter in the mobile browser.

It isn’t perfect, but it usually works pretty well and is generally painless… that was until last night. When it couldn’t find tweets to populate my friends timeline, it gave me an unexpected error that almost hurt my feelings. 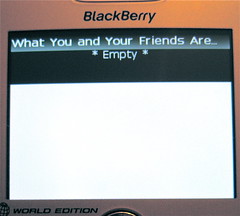 Ha! Isn’t that hilarious?! What an unfortunate goof. I suppose the TwitterBerry developers never took the time to test their error messages on the front-end. If they had, perhaps they might have avoided insulting their users.

This is what the Friends Timeline normally looks like: 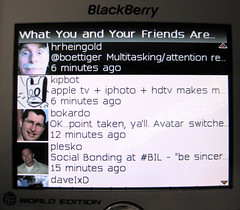 Has anyone else using TwitterBerry experienced this?