This week is a two-for-one special! Gabby couldn’t decide on just one person to highlight, and I wasn’t going to force her.

Gabby Hon is a user experience consultant who recently went independent. She was previously an information architect at Critical Mass and a senior interaction designer at Digitas. She is also the organizer of the Chicago chapter of the UX Book Club. Follow her on Twitter @gabbyhon. 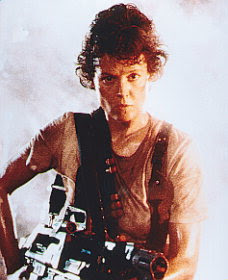 How long have you known of your hero and have you ever met?
I have met neither of my heroes as one was deceased and one was fictional. I learned of Ellen Ripley when I was 14 and Georgia O’Keeffe when I was 15.

How have your heroes had such a profound impact on your life?
When I saw ‘Aliens’ in 1986, it was nothing short of a revelation: I had no idea that women could be strong, could kick ass alongside–or even better than–the boys. I was 14 years old, awkward and shy and this was the first time I imagined a different life for myself.

At 15, I spent a lot of time at the local library and came across a book on Georgia O’Keeffe. I think I knew of her, nominally, but really only as the lady who painted the pretty flowers. The book I found was a collection of her letters with some commentary. It was here that I found the quotation that honestly changed my life, about her always being afraid and never letting that stop her. Again: revelatory. The idea that you could be afraid and still do what you wanted, pursue your dreams and interests and, more than that, you would survive. Fear doesn’t kill you, fear can be conquered, tamed and put in its place.

How do you gain knowledge and inspiration from your heroes?
I learned that getting past fear just once makes it so much easier the next time and the next and the next. I learned to trust my instincts, intelligence and abilities. I no longer seek nor find comfort in the approval of others–it’s fleeting and means much less than my own sense of self-worth.

What is one piece of wisdom your heroes have been quoted as saying that has stuck with you the most?
Georgia O’Keeffe: “I’m always afraid. But I never let it stop me–never.”

Ellen Ripley, “I say we take off and nuke the entire site from orbit. It’s the only way to be sure.” (Which, you know, is kind of ‘ha ha’ but also serves as a reminder that you’ll need to know when to walk away.)

Thank you Gabby for sharing your heroes with us!