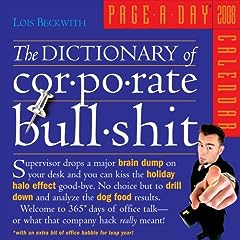 Today as I was cleaning up my desk, I found my old 2008 Page-A-Day Calendar of The Dictionary of Corporate Bullshit. I used to have it on my desk at Liquidnet and got a huge kick out of lamenting a new bullshit term every day. The definitions are hilarious and merciless. Sometimes the terms were so apropos that I’d give them out to my coworkers as a token of solidarity. I even gave a few to my boss.

I guess you could say that I was never really meant for the workplace. My tolerance for bullshit is legendarily low.

I saved some of my favorite pages from the first half of the year; since I quit my job in August, about 150 days were never pulled off the calendar. I’ll go through those soon and offer a follow-up post with any new gems that I find.

In the meantime, here are the ones that I saved from January through July. They still make me chuckle, and I hope they strike a cord with you, too.

The concept that women or minorities in the workplace are unable to achieve high-ranking positions due to unacknowledged discrimination, which, despite recent lip service in our progressive age, is still pretty much true; the reason why women who do manage to rise to positions of considerable authority are more likely to be found in “female-friendly” disciplines, such as Human Resources, Marketing, and PR; those who make repeated efforts to break the glass ceiling may become women who behave like men.

Intimidating or impressive way of saying “difficult” or “thorough,” enlisted to indicate the hard-coreness of what is being described and may be used in hopes it will scare weak people away (e.g., rigorous training period) by implying that participants won’t have time to sleep or eat, when in reality it’s only being described as rigorous because someone in marketing learned a new word.

A large white board present in many conference rooms, and often used for brainstorming sessions, that is there chiefly for the purpose of making the person writing on it feel important; the canvas for the chaotic display of information scrawled in illegible handwriting; a word whose most annoying use is in the verb form, e.g., “Let’s whiteboard this out,” which means “Let’s talk about this while writing our ideas down on a whiteboard as we do it”; to make matters worse, whiteboards outnumber the special “dry-erase” markers manufactured to be used with them by about 10:1.

A vague, generic, and slightly mysterious term used to describe products, of all things, particularly software; so overused it has lost all meaning, except in that calling something a “solution” is really just a way of saying that it might have “added value.”

What you are when your ass is canned; much different from getting laid off, because you screwed up so bad they are ejecting you from the company (what the hell did you do? because the reality is, it’s actually really kind of hard to get fired; things can get explosive and lawsuits may crop up); when possible, many companies will buy out employees who have a history of issues at the organization (read: pay them for their silence) or just make their lives so uncomfortable that they leave on their own.

A perspective companies declare they possess now, as if they didn’t have to in the past to survive; a label that is applied with zero effort and that needs zero follow-up, as long as the marketing and corporate communications departments are any good; not unlike the term “best of breed,” in that no company is going to claim they are not customercentric.

Guidance provided to a large group by a person or small group of people; an act that requires decisiveness, vision, the ability to be articulate, and, in an ideal world, integrity–which explains why it is virtually nonexistent in corporate America; often confused with yelling or being completely impossible to get an answer out of.

A conversational reference to where the speaker went to school used by major elitist tools who in reality probably aren’t that smart, because if they were, they wouldn’t need to mention their Ivy League credentials when recommending a good burger joint; the major irony is that many titans of the corporate world went to Joe Blow University, really don’t give a shit where people went to school, and in fact may regard highly credentialed colleagues as nancy boys.

A diagnostic test one may encounter in a workshop or management training seminar, used to assess an individual’s personality and behavioral preferences; involves answering a billion questions and ultimately brands you with a four-letter “type” that is supposed to enlighten you about how you deal with other people and the world; if you’ve never done this, you feel that by taking it you will unlock the mysteries of your personality and why life sucks for you; that doesn’t happen, but you will gain an immediate affinity for people who are similarly classified, feeling as if you are of the same “tribe” and everyone else is an asshole.

To pursue and create business contacts with the hope that someone you meet will hook you up with a job someday; employees who network can be identified by their fascination with anyone who has a better job; those who network will get the job you want, the promotion you deserve, regardless of his or her qualifications; get used to it, or start doing it yourself.

Do you have any Corporate Bullshit terms and definitions of your own? Give it a try!